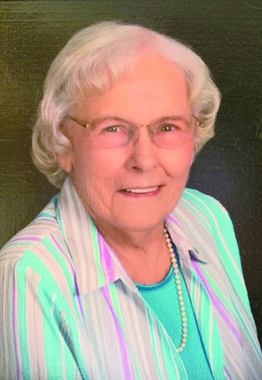 Back to Wilma's story

Wilma (Hilburn) Billington Floyd, 91, of Shawnee, passed away March 20, 2020.
Wilma was born on September 18, 1928, in Red Oak, to the late Noah V. Hilburn and Milton (Burgess) Hilburn. Wilma's early years were spent in Red Oak, where she went to school and excelled on the basketball court.
After high school, she attended college at Eastern Oklahoma State College and Southeastern Oklahoma State College to become a teacher while also continuing to play AAU and semi-professional basketball.
During her time at EOSC, Wilma met and married David Rhoten Billington. Wilma and David moved to Quinton, where Wilma taught home economics, history and civics for 36 years. She always had fond memories of her time as a teacher and her few years early in her career coaching girls high school basketball.
David and Wilma enjoyed 54 wonderful years of marriage together, raising two daughters, Jan and Tad, attending local sporting events, bowling, socializing with their friends and attending First United Methodist Church.
After David passed on March 3, 2003, Wilma married long-time friend Ed Floyd of Quinton. Their brief time together was enjoyable. After Ed's departure in 2008, Wilma moved to Shawnee, in 2010 to be closer to her daughters.
She joined Wesley United Methodist Church and was blessed with many new friends. Wilma always loved to be around people. She was a frequent volunteer for both her church and her school events. Wilma was an avid sports fan, fantastic quilter, great cook and a beloved mother, grandmother, and great-grandmother.
Wilma was preceded in death by her parents; her husband of 54 years, David Billington; her second husband, Ed Floyd, and two brothers, T.C. Hilburn and Lloyd Hilburn.
She is survived by her daughter, Jan Amrein and son-in-law, Roger Amrein, of Slaughterville, and daughter, Tad Hall and son-in-law, Keith Hall, of Shawnee; sister, Helen Sanderson, of Shalimar, Florida; four grandchildren, Chad Christy, of Oklahoma City, Erin Christy, of Tulsa, Summer Leone, of Shawnee, and Shea Hall, of Oklahoma City, and 10 great-grandchildren.
Details for the Celebration of Life services will be announced in the future. Services under the direction of Waldrop Funeral Home of Wilburton.
Published on March 23, 2020
To plant a tree in memory of Wilma Billington Floyd, please visit Tribute Store.

Plant a tree in memory
of Wilma

A place to share condolences and memories.
The guestbook expires on June 21, 2020.

Marva Francis
She will be missed in the Quinton community and by all the friends and students who had the pleasure of knowing this wonderful lady. To her family; I wish comfort and peace filled with precious memories. May God bless and keep you all.
View all