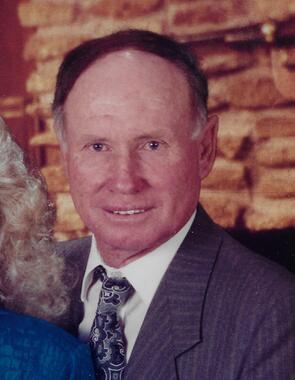 Back to Vernon's story

Vernon Edward Lawson, 87, of McAlester, passed away on Sunday, January 12, 2020, at a local nursing center.
The family will greet friends on Thursday evening from 5 p.m. to 7 p.m. at Bishop Funeral Service.
Funeral services will be held at 2 p.m. on Friday, January 17, at Bishop Chapel of Memories with the Rev. Chip Hinds officiating. Burial will follow at Tannehill Cemetery near McAlester.
Vernon was born on September 1, 1932, in Crowder, to Thomas and Caldonia (Billins) Lawson. He was raised on a sweet potato farm.
Vernon married Leonia Wallis on April 13, 1952, in McAlester. He later entered the United States Navy, where he served four years and was stationed on the USS Eldorado.
In 1957, he joined Pipelining Inc. He rose to the position of foreman and after eight years decided to bring his family home to Oklahoma. He worked for a short time as a cattle ranch foreman, before he began working at McAlester Army Ammunition Plant. Vernon worked for 22 years and was the pipe shop foreman when he retired. During his working years, he also owned a cattle ranch and was best known for raising Brangus bulls for sale.
During his early years in Oklahoma, he served as vice-president of the Canadian Round Up Club and was a member of the Oklahoma Cattleman's Association.
He also was an elder and deacon of the McAlester Church of God (Seventh Day) for over 40 years and during that time he also supplied beef for the summer youth camp several times.
During his retirement, he enjoyed working on his lake house and helping his daughter build her dream home.
Vernon is survived by his son, Don Lawson and wife, Tracy, of Harrison, Arkansas; daughter, Rosaetta Hodges and husband, Steve, of Canadian; grandchildren, Rebekah Everhart and husband, Richard, of Moberly, Missouri, Jeremy Lawson and wife, Christy, of Harrison, Arkansas, Benjamin Holland and wife, Sarah, of Ottawa, Kansas, John Holland Jr. and wife, Victoria, of Edmond, Bradley Holland and wife, Amanda, of Fort Gibson, and Keely Long and husband, Chris Long, of Ozark, Arkansas.
He is also survived by 16 great-grandchildren; a brother, Bill Lawson and wife, Carolyn, of Canadian; sisters-in-law, Linda Lawson, of Indianola, and Joyce Wallis and Shirley Blevins, both of McAlester, and a brother-in-law, Vernon Dickinson, of Harrah.
Vernon was preceded in death by his parents, Thomas and Caldonia Lawson; wife, Leona (Wallis) Lawson; brother, Fred Lawson; sister, Charlotte (Lawson) Dickinson; brothers-in-law, Don Thomas and Tony Wallis, and a sister-in-law, Linda Payne.
Pallbearers will be Jeremy Lawson, Richard Everhart, Benjamin Holland, John Holland Jr., Bradley Holland and Tecumseh Sloane.
The Men of the Church of God (Seventh Day) will serve as the honorary pallbearers.
Published on January 14, 2020
To plant a tree in memory of Vernon Edward Lawson, please visit Tribute Store.

Plant a tree in memory
of Vernon

A place to share condolences and memories.
The guestbook expires on April 13, 2020.

Magnificent Life Spray was purchased for the family of Vernon Edward Lawson by Shelli Johnson and Family.  Send flowers