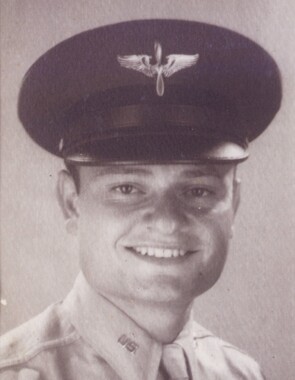 Back to Sylvester's story

Sylvester J. DeGiacomo, 98, of Clinton, formerly of Krebs, died on Saturday, December 14, 2019, at Clinton Veteran's Center.
Rosary will be held on Thursday at 7 p.m. at Brumley-Mills Chapel.
Funeral services will be on Friday at 11 a.m. at Brumley-Mills Chapel with Deacon Bill Anderson officiating. Military honors will be provided by the United States Army Honors Detail. Burial will follow at Mount Calvary Cemetery.
Pallbearers are Leroy Conners, Ryan Harrison, Ron Caniglia, David Giacomo, Dusty Carey and Rusty Carey.
Sylvester DeGiacomo was born on June 7, 1921, in Krebs, to Cosmo and Christine (DeDomineco) DeGiacomo. He grew up in Krebs and had lived there virtually all his life until he moved into the Veteran's Center in Clinton in 2017.
Sylvester was a World War II veteran, serving in England and Germany from November 7, 1942, until he received his honorable discharge on April 7, 1946.
Sylvester was a "metal broker", collecting all kinds of metal, processing it and selling it.
He is survived by three nieces and five nephews, Laura Beaver, Phyllis Baker, Alice Ann Cathey, Jim Giacomo, Ronald Giacomo, and Donald Giacomo, David Giacomo and Danny Richard Giacomo; great-nieces, Lisa Harrison and Natalie Horne; great-nephews, J.D. Giacomo and Chuck Beaver, and several great-great-nieces and great-great-nephews.
He was preceded in death by his parents, and four brothers, Dominic, Paschal, Daniel and Angelo.
Published on December 17, 2019
To plant a tree in memory of Sylvester J. DeGiacomo, please visit Tribute Store.

Plant a tree in memory
of Sylvester

A place to share condolences and memories.
The guestbook expires on March 16, 2020.

Darren Master
I first met Sylvester in 2000 just right after I moved to Krebs from Chicago. I stopped to talk to as he was gathering up metal to put in his truck. I interduce myself to him and he said that his name is Sylvester but people call me Silver. From that day out I would see him in and out of Walmart in the morning and then in the evening when I was on my way home from work. Id stop and chat with Silver for about and hour or so and told him how I liked to collect stuff also. We talked about family and friends and where we been. I introduced my children to Silver , Victoria, Devin and David. They were young and over the years at least one of them were with me when I drove by and stopped to chat. ...I hadn't seen Silver and I was told that he was in the VA hospital this was a few years back. I was told the other day By Ron Caniglia that Silver had passed. I told my children and they were sad to here that. I can type all day on the things and friendly chats that Silver and I had, but the loss of a good friend is hard to take. I'm sure glad that I met Silver , and IM very proud to call him my friend. He will be ever in my and my children's thoughts.Read more
Mary L Pliska
Sylvester’s nephew, Angelo DeGiacomo who lives in Oklahoma City area but is not listed above, visited with Sylvester several times when I was visiting in the Krebs area. The last time was about four years ago. He had pretty much lost his hearing but had eyes like a teenager and a very sharp mind. He had a brilliant awareness of what was going on in the world around us and kept up with current events. He never complained. Was fascinated with fossils and things of the natural world. He was a delight to visit with. Angelo and I took him some cake that last time that was given us to share baked by Leda Garzarella in Hartshorn. We celebrate Sylvester’s life and remember the lives of all our ...wonderful Italian ancestors. Syl’s mother, Christine, was a friend of my grandmother, Marta Blua Lovera Testa. Christine rode to Church with us every Sunday morning. She made beautiful hand crochet handkerchiefs for my sister and I. Angelo has them now and plans to put them in the Krebs museum. Christine was such a good woman, always had a smile!Read more
View all