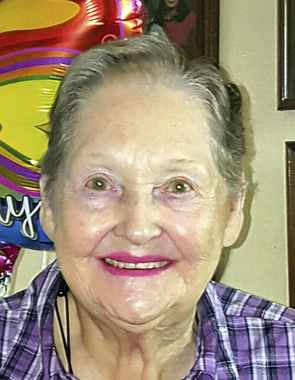 Back to Margaret's story

Margaret Ruth (Hicks) Koch, 91, of McAlester, died on Friday January 3, 2020, in McAlester.
A graveside memorial service will be held 1 p.m. on Saturday January 18, at Tannehill Cemetery Pavilion officiated by the Rev. Bob Wolf. Inurnment will follow. Cremation arrangements are entrusted to Bishop Funeral Service and Crematory.
Honorary pallbearers will be Gene Koch, Russell A. Koch, Charles D. Koch Sr., SPC Charles D. Koch Jr., Riley G. Koch and Preston R. Koch.
Margaret was born to Benjamin Franklin and Annie (Easley) Hicks on January 27, 1928, in Garza, Texas. She graduated from McAlester High School in 1947.
Margaret married Edgar E. Koch on March 1, 1947, in McAlester. They were married for 47 years until his death in 1995.
She worked as a nanny for several years and also as a clerk for Gibson's Discount Center.
Margaret was a member of Harvest Time Tabernacle Pentecostal Church. She loved to shop at garage sales, read and sing praises to the Lord.
She was preceded in death by her parents, Benjamin F. and Annie Hicks; her husband, Edgar E. Koch; brothers, Riley Hicks and Frank Hicks, and sisters, Lucille Dean and Beatrice Gruening.
Margaret is survived by her sons, Gene Koch and wife, Kathy, of Carrollton, Texas, and Charles D. Koch Sr. and wife, Nancy, of Salt Lake City, Utah; grandchildren, Russell A. Koch and wife, Becky, of Collinsville, Texas, and SPC Charles D. Koch Jr., of Fort Campbell, Kentucky; step-grandson, Edward Astudillo and wife, Roma, of West Jordan, Utah; great-grandchildren, Riley G. Koch and Preston R. Koch, both of Collinsville, Texas; sister, Patricia McNully, of Shady Point; brother, David Hicks and wife, Teri, of Arlington, Texas, and sister-in-law, Violet Hicks, of Wagoner. She is also survived by several nieces, nephews and friends.
Published on January 13, 2020
To send flowers to the family of Margaret Ruth Koch, please visit Tribute Store.

Send flowers
in memory of Margaret

A place to share condolences and memories.
The guestbook expires on April 12, 2020.