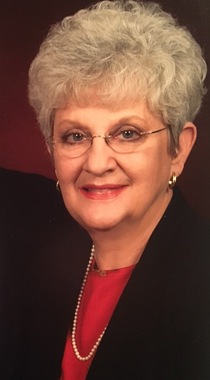 Georgeann Kennedy, formerly of Wilburton, departed this earth on Tuesday, January 22, 2019, in McAlester.
Georgeann was born on March 8, 1940, in McAlester, to George and Cleo (Colvard) Giacomo. She grew up in Wilburton and graduated from Wilburton High School with the Class of 1958. She holds the distinction of attending every Wilburton High School Alumni Reunion Banquet for 60 consecutive years. She served as an officer in most every position of this association.
Professionally she was a secretarial assistant to the dean at Eastern Oklahoma State College, to the plant manager at Congoleum Carpet Mills, and later in the family business, Kennedy Realty.
However, her lifelong vocation was family, a love affair with George Edward that started in junior high and lasted through almost 60 years of marriage. She was the mother of three boys, Eddie, Neal and Craig. She enjoyed the same things that her boys and her grandchildren did, trips to the lake, sporting events, Italian food, camping, pets and music. She was the organizer and host for big family get-togethers and grounded in her strong Catholic faith.
She is survived by her husband, George E. Kennedy Jr., of McAlester; sons, Eddie and Julia, of Broken Arrow, and Dr. Craig Kennedy and Rena, of McAlester; grandchildren, Kelcy Kennedy, Erica Kennedy, Chase Kennedy, Carlye Kennedy, Brazdon Everett, Joey Kennedy, Capt. Kristen Shay and husband, Capt. Sean Shay, Chloe Kennedy, Logan Price, Braden Price, Laurel Price, and Brooke Price; great-grandson, Kameron Kennedy; siblings Larry, Jimmy, Paula, Debbie, and Steve; brother-in-law, Col. James R. Kennedy, other family and a host of friends.
Georgeann was preceded in death by her parents, Cleo (Colvard) Giacomo, and George Giacomo; her son, Joseph Neal Kennedy; in-laws; Ed Sr. and Maxine (Smith) Kennedy, and brothers, Michael and Rick Giacomo.
A Rosary will be recited at 6 p.m. on Friday, January 25, at Sacred Heart Church in Wilburton, led by the Rev. Khiet Nguyen.
The Mass of Christian burial will be at 10 a.m. on Saturday, January 26, at Sacred Heart Church concelebrated by the Rev. Khiet Nguyen and the Rev. Josh Litwack. Interment will follow at Calvary Cemetery in Wilburton.
Pallbearers will be James F. Elliott, Tim Beller, Honorable Jim Grego, and Dr. George H. Royce.
Arrangements entrusted to Jones-Harkins Funeral Home of Wilburton.
Published on January 24, 2019
To plant a tree in memory of Georgeann Kennedy, please visit Tribute Store.

Plant a tree in memory
of Georgeann

A place to share condolences and memories.
The guestbook expires on April 24, 2019.