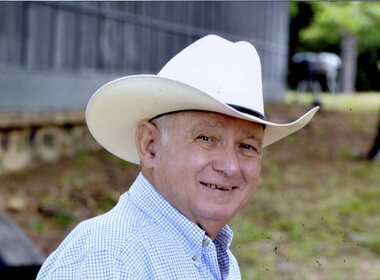 Back to Earl's story

Earl Autry Jeffrey passed away on Sunday evening, Sept. 10, 2017, at his home in Wilburton.
Earl was born on April 12, 1943, at the family home west of Wilburton, to D.H. and Bonnie Jean (Newsom) Jeffrey. He grew up on the family farm, working with cattle and horses from a young age.
In 1951, at the age of 8, he was baptized and spent many summers attending church camp at Robbers Cave State Park. He graduated from Wilburton High School in 1960, and went on to earn both his bachelor's and master's degrees from Northeastern State University in Tahlequah.
Upon graduating from college, he taught high school biology for one year at Kinta High School. At that time, he wrote a grant that funded the first Community Action program for Haskell County. He subsequently served as the director of that program until being drafted into the United States Air Force in 1966.
Upon returning home from the military, he continued his public service work with the Community Action Manpower Programs. Through these programs, he was instrumental in helping many people enter the workforce in a multi-county area.
Upon leaving that position, he became self-employed as a general contractor on numerous construction projects across Oklahoma, Kansas, Texas and Nebraska.
Earl loved Latimer County and the Wilburton community and was dedicated to improving the quality of life for the citizens of this area. He served on the Latimer County Hospital Board, later volunteering his time as the Latimer County Hospital Administrator.
In 1991, Earl was elected to serve as Mayor of the City of Wilburton, a position he held until 1994.
He was a former chairman of the local chapter of the American Red Cross and was a current member of the American Legion.
In addition to Earl's civic duties, he was a licensed real-estate broker for the State of Oklahoma. He was also a member of the Wilburton Masonic Lodge, the McAlester Consistory and the Bedouin Shrine of Muskogee.
Earl had a passion for the western way of life. As a young man, Earl competed across the nation as a steer wrestler in the Professional Rodeo Cowboys Association and became a Gold Card Member of the PRCA. Throughout Earl's adult life, he owned and operated Jeffrey Cattle Company, where he raised both registered and crossbred cattle.
Earl is survived by his wife of 36 years, Claudia, of the home; four children and seven grandchildren, Amy Fair and husband, Steve, and their children, Christian and Alayna, of Stillwater, Tiffany Layton and husband, Rowdy, and their children, Aubrey, Landry, and Lucas, of Welch, Lane Jeffrey, of Wilburton, Latt Jeffrey and wife, Lizzie, and their children, Jewel and Jade, of Wilburton. Earl is also survived by one sister, Geral Elaine Storie and her husband, Paul Ray, of Marshall, Texas; one brother, Johnny Jeffrey, and his wife, Ellen, of Wilburton, and several loving nieces, nephews, cousins, and family friends.
Earl was preceded in death by his parents, D.H. and Bonnie Jean Jeffrey.
Services will be held Thursday, Sept. 14, at 1 p.m. at Jones-Harkins Chapel in Wilburton. Interment will follow at Centerpoint Cemetery. Following the service, the family will receive friends at Centerpoint Community Building for refreshments and fellowship.
Pallbearers will be Paul Storie Jr., John McAlester, Steve Fair, Rowdy Layton, Carroll Huggins and Ross Roye
Honorary pallbearers will be Bill Allen, Duane Jeffrey, Bob Browne, Vernon Bullard, Dennis Deela, Joe Jeffrey, Larry Finch, Don Huddleston, John Cook, Stan McCasland, Walter Newsom, Pete Swaffard, Wayne Lucas, J.E. McAlester and Gene Bass
Services are under the direction of Jones-Harkins Funeral Home of Wilburton.
Published on September 13, 2017
To plant a tree in memory of Earl Autry Jeffrey, please visit Tribute Store.

Plant a tree in memory
of Earl

A place to share condolences and memories.
The guestbook expires on December 11, 2017.