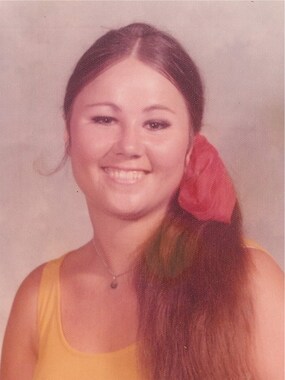 Back to Diane's story

Diane Basden, 63, of Quinton, was born on Jan. 3, 1953, in McAlester, to Jack Dempsey and Wanda Colene (Smith) Basden. She passed away on Wednesday, Dec. 21, 2016, in Quinton. She is survived by one daughter, April Murray and husband, Steve, of Quinton; one son, Cheyenne Basden and Rae Towery, of Aubrey, Texas; two brothers, Larry Basden and wife, Judy, of Clarksville, Tennessee, and Steve Basden and wife, Debbie, of Quinton; two grandchildren, Josh Murray and wife, Kristin, and Holly Wilson and husband, Dalton; seven great-grandchildren, Aubrey, Mabrey, Matthew, Darcy Jo, Adam Luke, Andrew Levi and Nash, and numerous nieces and nephews. Diane was preceded in death by her parents. Diane graduated from Quinton High School in 1971. She then went on to attend Eastern Oklahoma State College from 1973 to 1975. Diane furthered her education at Northeastern State University from 1975 to 1977. She worked for the McAlester News-Capital in 1971 as an advertising layout artist. She taught speech, drama and journalism in Wagoner from 1977 to 1978. Diane was a secretary for Jordan Insurance in McAlester in 1979, and a reporter for Quinton Times in 1986. She was also a reporter for the County Star in Stigler from 1983 to 1985. Diane attended Palestine Church as a child and was saved on Nov. 10, 1980, at her home in Quinton. Visitation will be today from 8 to 11:30 a.m. at Mallory Chapel in Quinton. Funeral services will be at 1 p.m. today, Dec. 23, at Palestine Community Church with the Rev. John Basden and the Rev. Wendell Folsom officiating. Burial will follow at Palestine Cemetery. Arrangements are under the direction of Mallory-Martin Funeral Home and Crematory of Stigler. Pallbearers will be Mike Daniels, Joe Daniels, Robert Satterfield, Gary Bennight, Ronnie Blankenship and Robert Davis. Honorary pallbearers will be Linus G. Williams, Dr. Mark McCurry, Ray Miller, Darrell Adcock, Coach Glen Stone, Jerry Basden and Mike Coxsey.
Published on December 23, 2016
To plant a tree in memory of Diane Basden, please visit Tribute Store.

Plant a tree in memory
of Diane

A place to share condolences and memories.
The guestbook expires on March 22, 2017.